A user-centered approach: simplicity and complexity in a homepage graphic

We were given the task to redesign the top of the homepage—particularly the content to the left which explains the scope of the data on the site. This content explains what happens with the payments companies make to produce energy and minerals on federal and Native American lands, and then where these payments go. The data on the site includes revenue, disbursements, and production.

The paragraph is meant to explain the scope of the site as simply as possible. However, there are two issues: (1) It’s not visual which overlooks more visually-oriented users, and (2) its simplicity doesn’t accurately explain the scope.

When first tackling this problem Brandi started with the paragraph on the homepage and restructured it in different ways to see how the information could be condensed and organized for easier understanding visually. This was condensed into the two sections below.

Based on this straightforward organization, Brandi was able to sketch and mock up ideas for the homepage graphic. 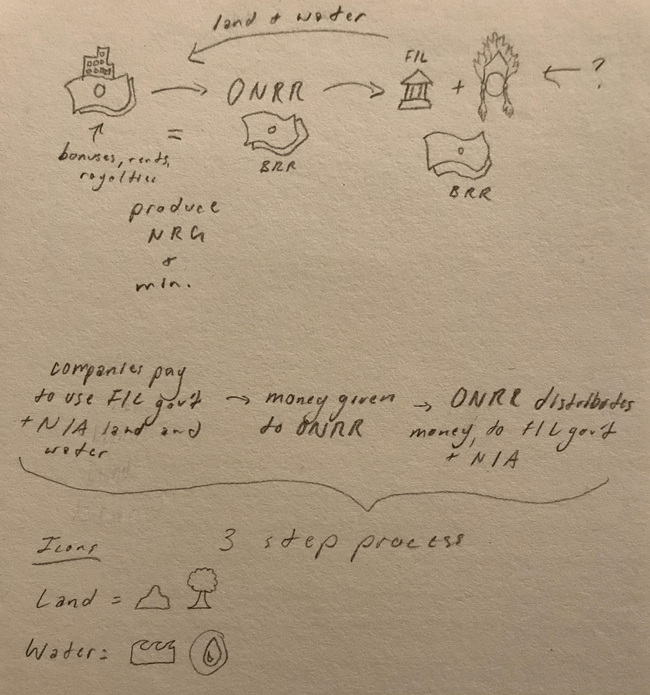 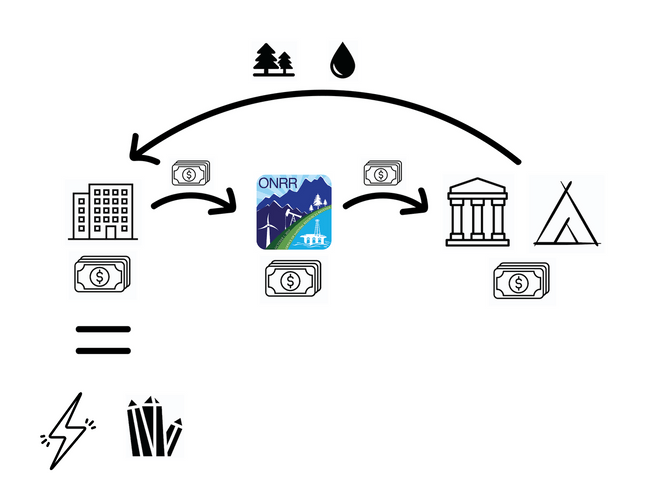 The first mockup was a bit complex, which we thought would overwhelm the user. Brandi knew it needed some condensing, but wasn’t sure how to accomplish that.

The team agreed with her at the next intern meeting. Additionally, some icons needed to be replaced and the process, as indicated by the arrows, required simplification.

From that feedback, two versions of the graphic were created: one going in one direction (left to right) and the other one in a circular process. 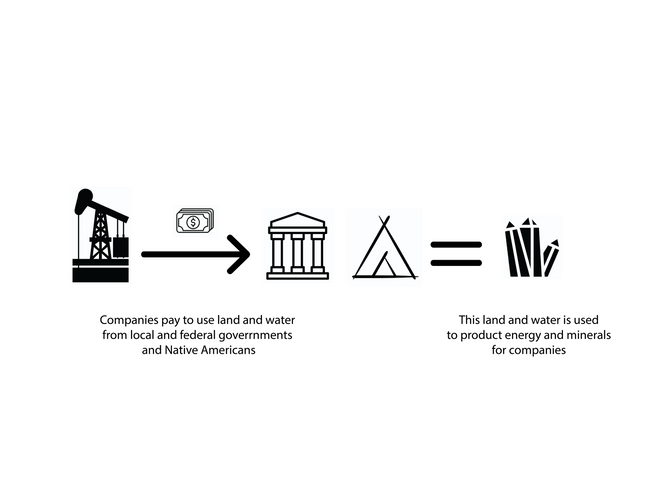 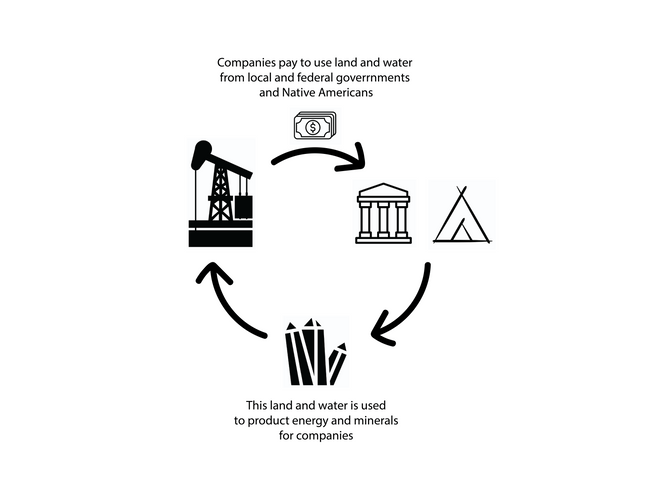 To help out, Sarah was invited to the project to have more brains to come up with a solution.

After a conversation, we decided to present to our mentor, Shannon, both versions to see what improvements could be made.

When presented, we learned that the process isn’t cyclical so the circular diagram would not communicate the process accurately.

Shannon also offered feedback on the text to better describe the process. Furthermore, she advised us to look at another intern’s diagram for content inspiration.

In addition, we were given a creative brief which helped to remind us of the goals to be accomplished for the homepage.

Summary of the problem statement or purpose of the product:

Something that visually shows the scope of the site at a glance for people who don’t read the paragraph.

Key users or personas of the solution:

Main scenarios in which the solution will be used:

Users come from another site to the homepage. They see the graphic which shows the scope of the site.

The creative brief made us more mindful of the key users, the main scenario in which they would encounter the solution, as well as ensuring the design met the business goals and followed certain design principles.

From the feedback and creative brief, Brandi then sketched a few card-based formats to explain the linear step-by-step process and was mindful of both simplifying the copy but also making it detailed enough for accuracy. Additionally, Sarah voiced that perhaps a card format would better suit accessibility standards.

While we preferred to work more collaboratively, scheduling constraints prevented that. Therefore, we decided to work on the task independently and come together during the intern meetings. 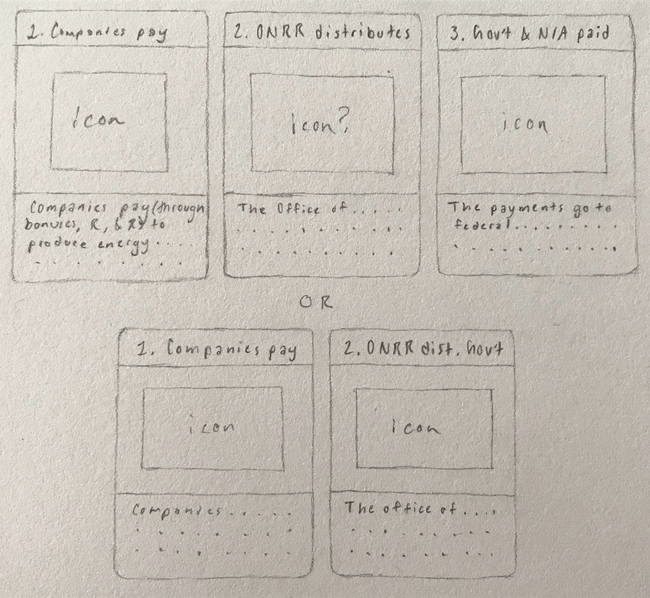 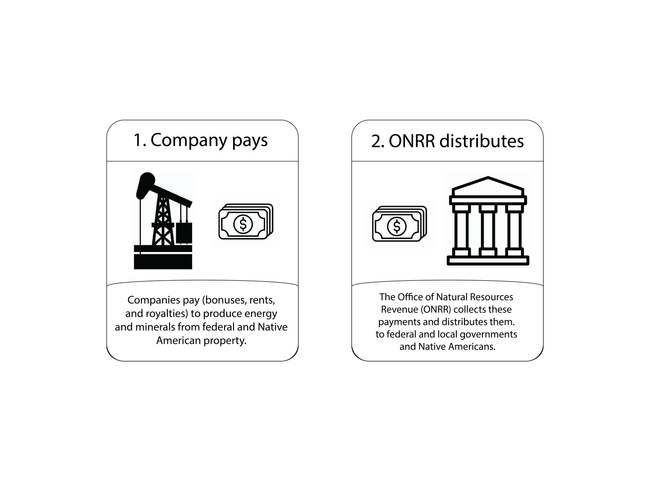 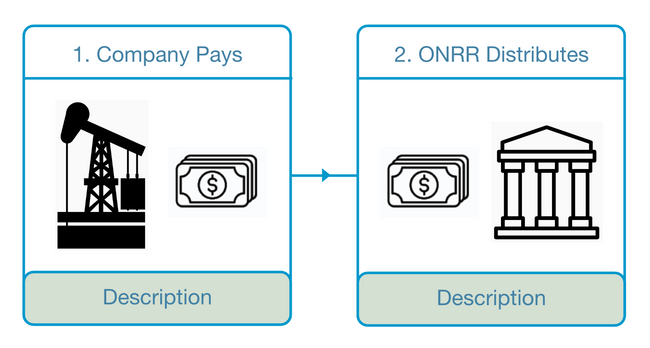 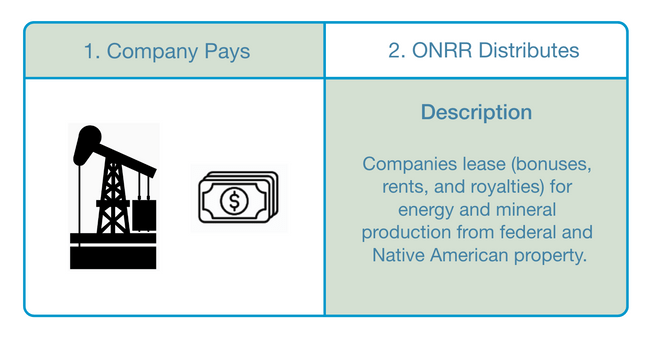 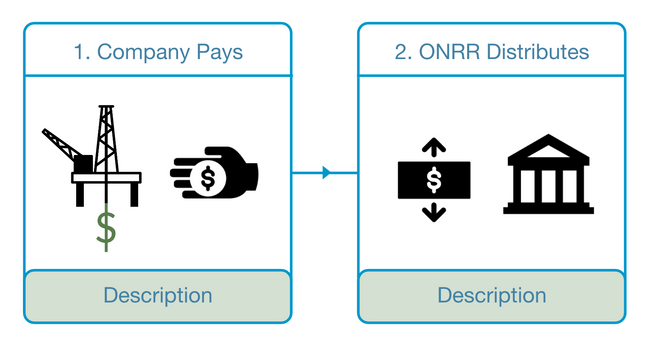 In the last version above, Brandi included an interactive description element which would slide up to provide more detailed information. Brandi’s card-based and interactive format inspired iterations moving forward. Additionally, the product manager, Maroya, suggested that the entire horizontal space at the top of the homepage could be utilized. 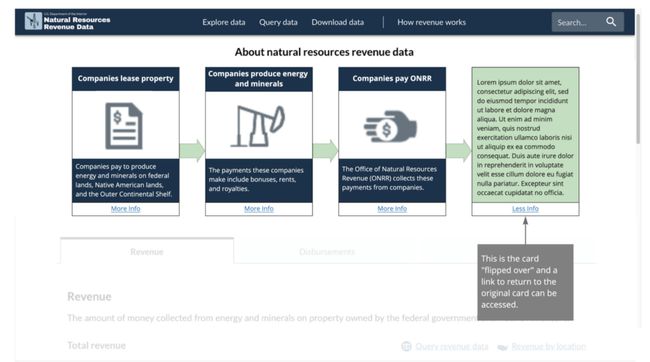 One version that Sarah designed is above. Again, a card-based format with interactivity was included—inspired by Brandi’s iterations. In Sarah’s design, she included four ways in which the content would be understood:

Additionally, we needed a usability plan. Shannon provided an interview guide which Brandi based her plan on.

The introduction was similar, however some content from the guide was adjusted to suit our particular task.

Brandi researched usability study templates and added elements addressing the tasks, goals, success and failure standards, as well as the type of users they were to recruit.

Because the user group we were targeting was the general public, this enabled us a wide pool to recruit from. Brandi and Sarah focused on their social network for quick recruitment including friends, Facebook, and LinkedIn.

The interviews were conducted by Sarah, Brandi, and Shannon, with internal staff who volunteered as notetakers. We rotated the order in which the designs were shown to users to reduce bias. There were three designs users were presented with: two re-designs and the existing homepage which Mojo, a developer on our team, suggested we include in the interview.

The interns were presented with a few challenges that required them to think on their feet. At one point, Brandi had to conduct an interview on her own without a notetaker; this meant she had to be even more attentive to user feedback while asking questions simultaneously. In addition, they had a few no-shows. The interns learned that these challenges were a common part of the interview process and adapting to them was necessary skill to be learned in UX research.

The findings revealed that most users responded more positively to the four-card layout with four ways of reading or visualizing the process. Users had also communicated that particular option helped them understand the scope of the NRRD site, especially because it provided an option to access more information. Participants liked how the interactivity worked in the two card version.

We landed on a hybrid of the two options with three cards and similar interactivity to the two card version.

In going through this process, these are some of the lessons we learned.

“It’s good to have different iterations of one solution because you can learn what elements are effective for the user and which ones aren’t. This can even lead to a combination of the iterations to find the best solution.”

“There are a lot of working mechanics and parts into solving one problem (identifying the problem, creating interactions, user interviews, and analyzing findings).”

“Independently designing, iterating and then coming together to share multiple ideas is useful. It gives us the opportunity to combine our ideas for a possibly more effective prototype.”

“It’s important to have a plan but expect the unexpected. We were sometimes required to think on our feet. For example, if the users were not yielding the information to answer the goals, we had to go off script.”

“It’s best to do interviews with multiple notetakers. People capture different pieces of information that one or two people may miss. Additionally, a detail that most of the group notices may mean that it is especially important.”

Cash by DinosoftLab from the Noun Project

Teepee by Andrejs Kirma from the Noun Project

Government by The Icon Z from the Noun Project

Mineral by IconMark from the Noun Project

Building by Alice Design from the Noun Project

Lightening bolt by priyanka from the Noun Project

Tree by Icongeek26 from the Noun Project

Oil by Chintuza from the Noun Project

Oil rig by Patrick Trouvé from the Noun Project

Government by Adrien Coquet from the Noun Project 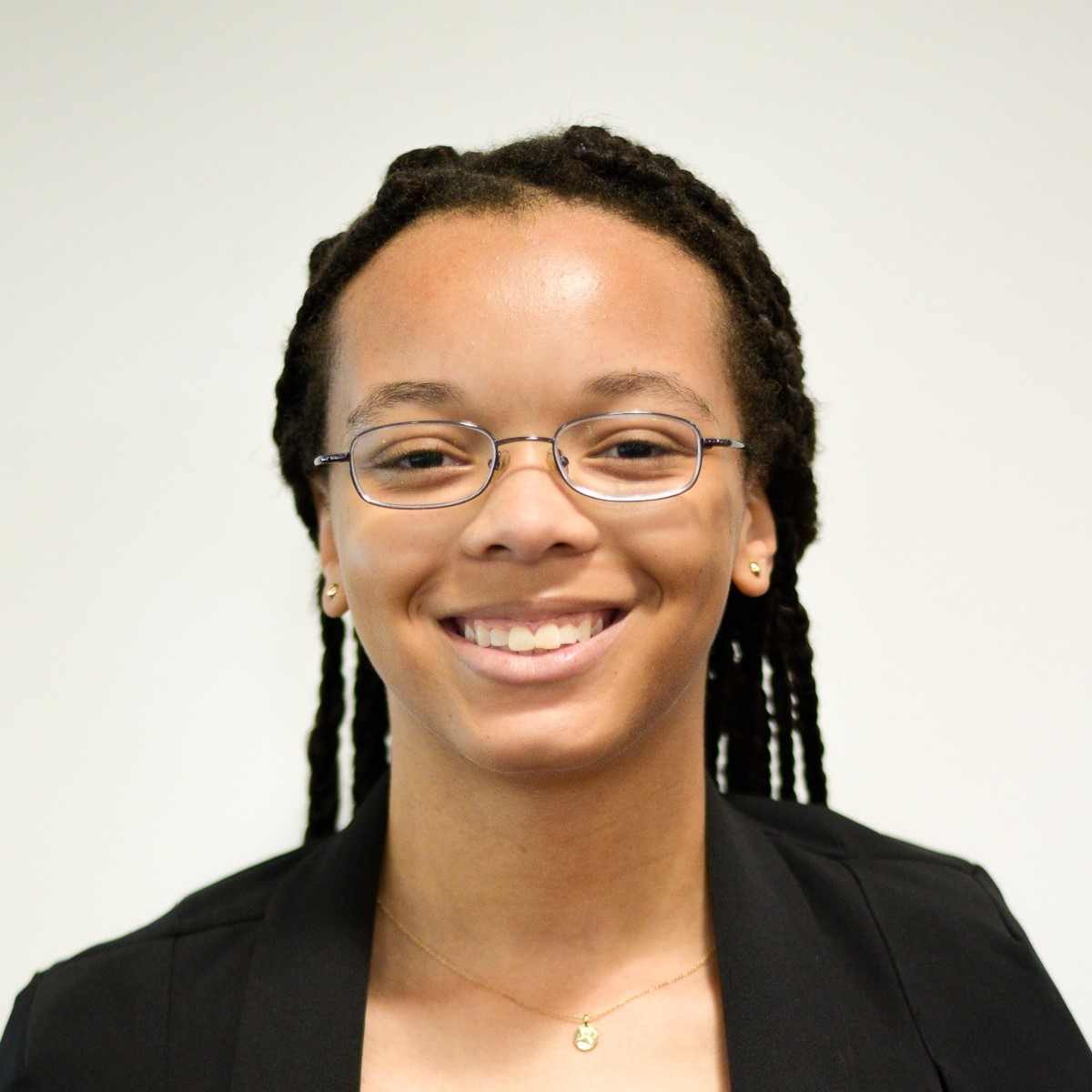 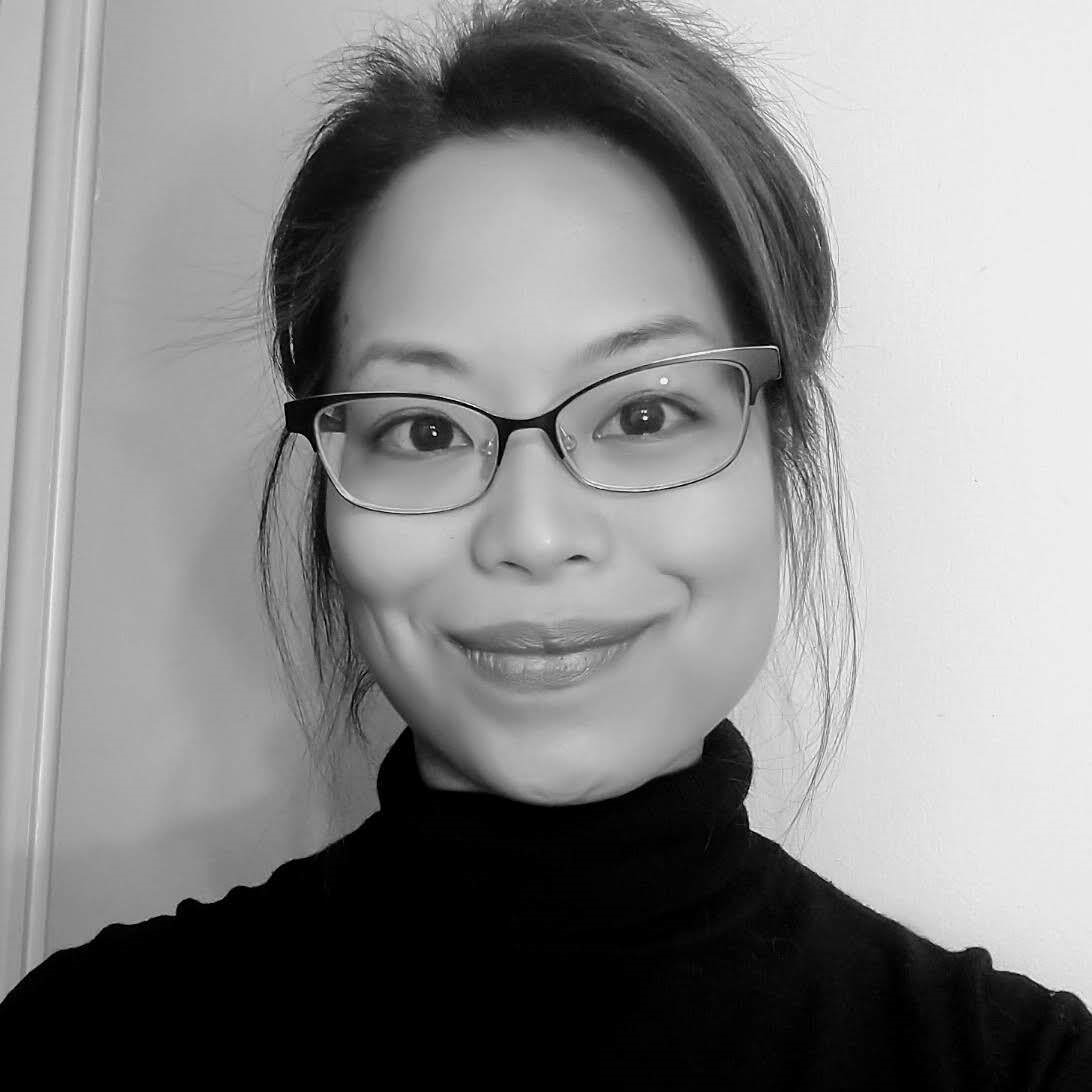